Ghana to Sell Stakes in Thermal-Power Plants to Cut Debt

Ghana to Sell Stakes in Thermal-Power Plants to Cut Debt

The West African nation has identified the fossil fuel-burning plants capable of producing a combined 501 megawatts, or about a third of its total thermal power-generating capacity, that it’ll at least partly privatize, James Demitrus, head of revenue monitoring at the Energy Ministry, said in an interview in the capital, Accra. While thermal power plants can burn oil or gas to generate electricity, the country can also produce 1,180 megawatts from hydro-power.

Investors would be expected to fund upgrades to boost the facilities’ output by a third, according to Demitrus. PricewaterhouseCoopers LLP and Fieldstone Private Capital Group have been advising on the privatizations, he said. State-run thermal plants are operating at 50 percent to 65 percent of capacity, with 80 percent the target, according to the Volta River Authority, the state power producer.

Under Ghana’s previous government, the country suffered almost three years of planned power outages that often lasted up to 24 hours and curbed economic growth. While the supply has improved under President Nana Akufo-Addo, who was elected in December 2016, his administration is seeking ways to reduce debt in the power industry and make state-owned companies profitable.

The World Bank says Ghana’s economy will probably expand 8.3 percent this year, the fastest rate on the continent, boosted by increased oil output and stronger credit growth. Structural reforms in the country’s energy sector, including improving the management of state-owned enterprises, are crucial to sustain growth, the International Monetary Fund said last year.

The country has thermal generation capacity of about 1,451 megawatts, 1,325 megawatts of which is from facilities belonging to the VRA, which operates thermal plants in addition to the hydro-power facilities at the Akosombo and Kpong dams. Authorities first announced plans to sell stakes in an unspecified number of thermal facilities in August.

State power companies had accumulated loans of a combined 10 billion cedis ($2.3 billion) by the end of 2016, with the government starting to sell bonds last year in part to pay them off, Demitrus said. The government is reorganizing VRA and will create a holding company with subsidiaries, one of which will be for thermal power operations, he said.

“After those debts are cleared the government does not want the cycle to be repeated,” he said. Those plants “are not very efficient. They’ve been lying idle for almost a year,” he said.

The facilities being offered include a 125-megawatt thermal plant in the port city of Tema belonging to the state pension fund, and VRA plants in Kpone and Tema that have installed capacities of 250 megawatts and 125 megawatts respectively, Demitrus said.

Other VRA plants won’t be offered to investors because some are relatively efficient while others already have private partners, according to Demitrus.

The Federal Government of Nigeria reveals plans to demolish more structures to give way for full internationalization of Akanu... read more 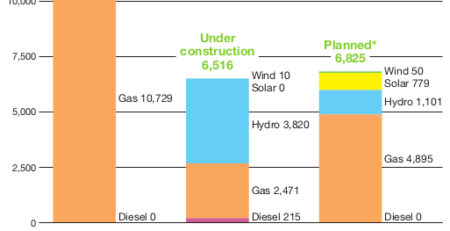